Algeria became a hub of Third World filmmaking after independence from French colonial rule in 1962. At this time a government-financed production system was implemented with the aim to support a film industry that would form an alternative national vision. This New Algerian cinema reached its zenith with the Palme d’Or awarded to Mohamed Lakhdar-Hamina’s Chroniques des annés de braise/Chronicle of the Years of Fire (1975). Lakhdar-Hamina’s film traced “the development of the different Algerian resistance movements from the beginning of colonisation until the insurrection in 1954 [through the eyes of]  “a peasant family [who] represent Algeria as a whole” (Spaas 136). A thriving Cinémathèque was built in Algiers that was deemed “the most important in Africa, preserving thousands of prints and showing five different films each day” (Salmane 20). 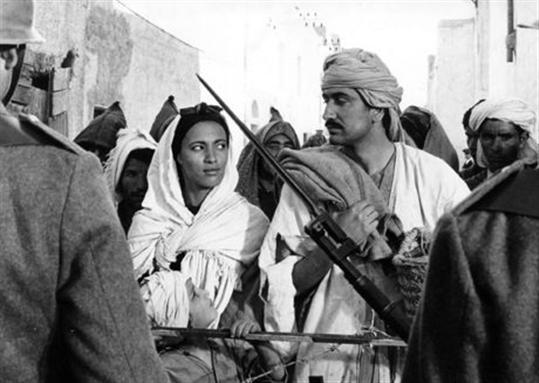 However, as Mohammed Tazi and Kevin Dwyer note, Algerian filmmaking “entered a crisis in the late 1980s […] resulting both from a reorganization of the film sector in a privatizing direction and the outbreak of civil strife in the early 1990s” (9). While there were around 400 cinemas operating in 1986, only ten continued to screen films by 2004, and over the same period, audience attendance fell dramatically from 40 million annually to only 50,000 (Dwyer and Tazi 10). The civil war of the 1990s, referred to as the “Black Decade”, saw the “disengagement of the state, the impoverishment of the population, the increase in corruption and the contestation of power by Islamist movements” (Bonner 14). In 1988 the cinema was denounced by the state as a forbidden and unholy pastime, and armed Algerian-Islamist groups targeted cinemas. It became increasingly difficult for directors to shoot in the streets and many filmmakers and directors fled the country after a number of “Algerian cineastes [were] sentenced to death by the Islamists” (Shafik 43). In these difficult conditions Merzak Allouache directed Bab El-Oued City (1994): during filming in the Algiers neighbourhood of the same name, Islamist radicals fought against government security groups, with many innocent civilians caught in the crossfire. The aspects of contemporary Algeria which the film engaged with, including unemployment, shortage of housing, political corruption and rising fundamentalism pointed to severe problems at the heart of Algerian society and attracted the censure of the government.

However, it was not solely an increase in fundamentalism that contributed to the decline of the film industry. The growth of satellite television, with approximately 80 per cent of households having a satellite dish during this period (Korany 74), the illegal copying of films (Gugler 8), and the transition towards a market economy (Kamalipour) also had a marked effect. In the early 1990s the government pledged to form a new institution to restore Algerian cinema. However, in 1993 the national film industry was privatised and the government closed the Algerian Institute of Art and Film. According to Viola Shafik, these difficult political and economic conditions have led to the rapid closure of cinemas across the nation, and those that continue to screen films are increasingly dilapidated and neglected (262). Boujemaa Karèche, director of the Algerian Cinémathèque, noted that by the end of the 1990s, “Algerian cinema [had] zero production, zero film theatres, zero distributors, zero tickets sold” (qtd. in Armes 68). In fact, “between 1997 and 2002 not a single feature film was made in Algeria. The country [ultimately] risked cinematic amnesia” (Austin, 2004 24).

In spite of the inclement conditions, this period saw three films made in the indigenous Amazigh language: Machaho (1995), La Montagne de Baya/Baya’s Mountain (1997) and La colline oubliée/The Forgotten Hill (1996). Beyond their themes, these films in particular play homage to Algeria’s Amazigh (or ‘Berber’) people and constitute a significant move within the restrictive atmosphere of the period since this “large ethnolinguistic minority [had] long been discounted and even suppressed by the Arabo-Islamic Algerian regime”(Greenhouse 199). Indeed, the production of these films subsequently led to the Algerian government’s decision in 2002  to make the Berber language a national language (see Zoubir 232).

The situation has changed since the early 2000s, and contemporary Algerian cinema has entered a period of rediscovery both in terms of its purpose and the upholding of a filmmaker’s right as a citizen to participate in culture through creative means (an indication of the widely held desire for democracy in the country). The cinema’s revival, which is seen by critics to have begun in 2003, echoed the principles of the earlier period of Algerian cinematic eminence in the 1960s and 1970s, actively engaging with history and expressing a desire for socially progressive change. However, instead of government-approved accounts of the liberation struggle (the subject of many earlier films), contemporary filmmakers have focused on “the transmission of corporeal gendered memory, of marginalized cultural identities, and of neglected historical origins” (Austin 2010). 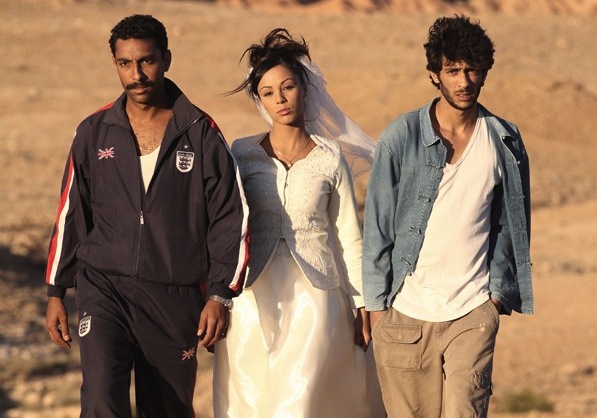 The comedy film Mascarades/Masquerades (2008), directed by and starring Lyès Salem, pokes fun at the customs of a small Berber village. Masquerades follows Mounir (Salem), part-landscaper, part-hustler, who is overprotective of his narcoleptic sister Rym (Sarah Reguieg) as she faces the daily scrutiny of idle gossip (Rym is viewed as a flawed commodity in the ‘marriage market’ due to her condition). In a moment of whim, Mounir creates a rumour by announcing to the village that his sister is in fact engaged to a wealthy businessman from the West. As a result, the people of Aurès prepare to meet this celebrity who, they believe, will bring wealth and good fortune to the village. Suddenly, the hopes and dreams of Aurès rest upon this idealised image of a Western man. On one level, Masquerades satirizes the mentality and practices of the village. However, on another, the film contains underlying themes that comment on contemporary Algeria: the motif of sleep is utilized to illustrate both a traditional system relentlessly holding on to its archaic ways, as well signifying a form of escape from the difficulties of everyday life, a surrendering to the existing state of affairs. In addition to this, the main characters of the film each represent an aspect of the country’s socio-political undercurrents: Khliffa, Mounir’s best friend and love interest of Rym, is an artist who wishes to start a video rental business. His dream is ironic considering that the majority of Algerian media is under strict censorship and until very recently cinemagoing has been banned. However, his hopefulness signals something of a progressive position. In contrast, Mounir, who epitomizes an orthodox mentality, wishes to maintain the status quo of the village. Lastly, and falling somewhere towards the middle of this spectrum, is the community of Aurès itself, and their preoccupation with Western culture (as illustrated through Mounir’s fantastical creation). They are ultimately expecting the appearance of something they are not certain of. To a degree, this indirectly refers to the way in which Algeria’s population is biding its time in  anticipation of social change. Therefore, Masquerades conveys the conservative nature of village life, the impossibility of resisting social change, the conflicts between different points of view and the idealized possibility of western-style wealth and freedom (shown as an illusory dream). The film’s playful and comedic look at the social mores of everyday life is proof not only of the maturation of a national cinema but also of increased freedom of expression and the growing creativity of filmmakers.

The large budget allocated to the film season “Hommage aux cinéastes algériens” at the Institut du Monde Arabe in Paris in 2003, as part of the Year of Algeria in France, a series of events which explored Algeria through the arts, indicated the resurgence of filmmaking in Algeria. The season included the screening of films produced by Algerian filmmakers working in Algeria, Algerian filmmakers who have since continued their work in France and beur (French citizens of Algerian origin) filmmakers also working in France. This diaspora of Algerian filmmakers is indicative of the displacement of key practitioners to Europe as a result of the civil war. However, the film season also clearly indicated that domestic production had restarted. Another factor which has contributed to the regeneration of the cinema was the organization of the Taghid d’or Short Film Festival in 2007, which aims to cultivate new talent. The festival not only emphasizes the benefits of short films as an ideal way to develop and showcase artistic skill, but also, and more importantly, directs attention to the rebirth of Algeria’s film industry. This emphasis on domestic cinema, rather than diasporic Algerian filmmaking, has acted as a catalyst for film production in Algeria.

Contemporary Algerian cinema has become more various in terms of genre, allowing it to explore a wider range of themes and issues. There has been a transition from an overtly militaristic cinema which focused upon the glorification of the war of independence to films that are more concerned with the everyday lives of Algerians, and the individual’s struggle to make sense of their own culture. According to Algerian filmmaker Salim Aggar in a recent interview, what makes contemporary Algerian cinema unique from other bordering national cinemas is the “openness to new digital film techniques [with the interest] in the latest technical advances so that [the cinema] can bring more in terms of quality” (qtd. in Ouali 2010). Research is being conducted into recent technical developments that might enable the film industry to evolve further through the judicious application of cost-effective methods. However, as Josef Gugler notes, “until cinema theatres make the expensive transition to digital projection, much of the savings in production is lost in transferring digital film to 35 mm film” (8). Nevertheless, it appears that the country today is producing more films than previously seen in its entire history. Could this mark a turning point in the development of the country’s film industry? If the cinema of Algeria continues to be challenged and affected by socio-political changes, it is nevertheless evidently marked by a constant desire to rehabilitate the image of Algeria. This national cinema is evolving from a time when films were stigmatized by the conditions of their production and is now entering a propitious stage that emphasizes both a passion for short features and the arrival of a new generation of filmmakers seeking to explore, and possibly reconcile, some of the contradictions at the centre of Algerian society.

Bonner, Michael David, Megan Reif and Mark A. Tessler. Islam, Democracy and the State in Algeria: Lessons For the Western Mediterranean and Beyond. Oxford: Routledge, 2005. Print.